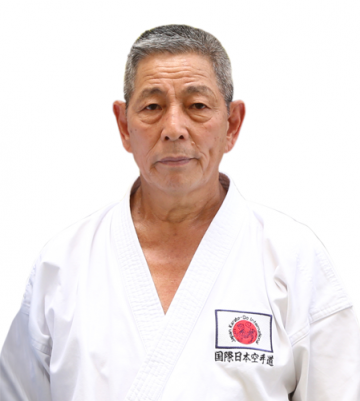 Saito Sensei was born in Northern Japan and trained in the JKA system with his sensei, Hiroshi Shoji. When Saito Sensei left Japan he initially taught in France, South America and the Caribbean. In Guadeloupe, French West Indies he was chief instructor of the Budokan French Federation. In 1971 Saito Sensei came to South Florida where, until 1992 he was an instructor of the International Shotokan Karate Federation, South Atlantic branch. In 1993 he founded Japan Karate-Do International with affiliated members in England, Venezuela, Haiti, Puerto Rico and Curacao. Teaching class, two - three each day, six days each week along with traveling for teaching seminars, Saito Sensei is exactly where he wants to be: in a dojo passing on the values of a life dedicated to karate. Sensei often reminds his students that one needs money, dedication, time and trust to make the most of one's karate training.